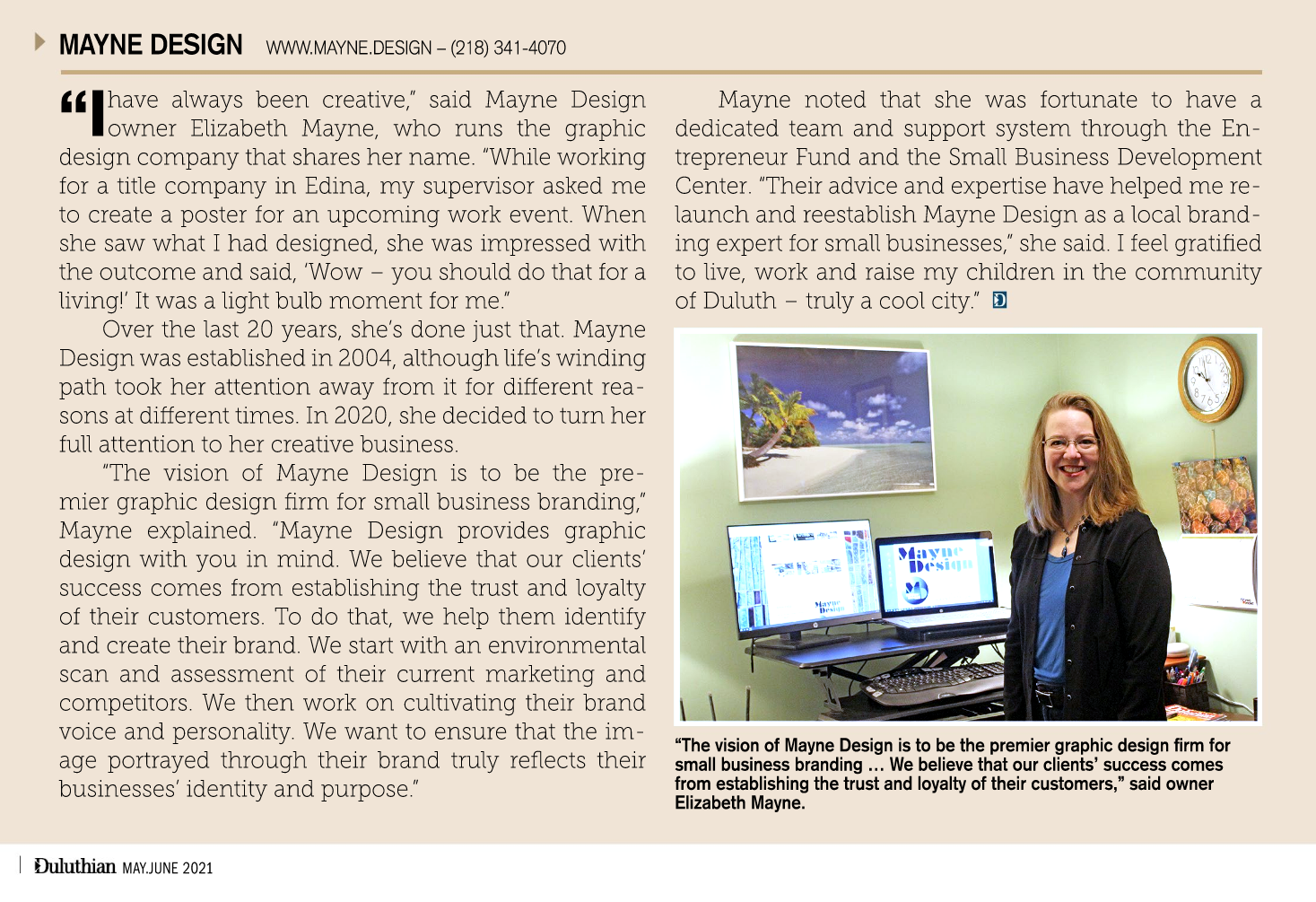 Our Creative Director, Elizabeth Mayne, has always been creative. Born and raised in Duluth, she was a hit at family birthday parties because of the unique and funny poems she would compose for loved ones' special events.

As she entered college at the University of Minnesota -Duluth, she was interested in how the human brain functioned, leading her to major in Psychology. Upon graduation, she worked in the human services field for a time, but soon realized it wasn't quite the career she was looking for.

Deciding to try a change of pace, Elizabeth moved to Eden Prairie. While working for a title company in Edina, she was asked to create a poster for an upcoming work event. Her manager was really impressed with the outcome, and said, "Wow- you should do that for a living!" The spark was lit, and soon Elizabeth went back to school to earn an additional two-year degree in Electronic Publishing (Graphic Design) from Hennepin Technical College in Minneapolis.

Elizabeth married in 2001 and moved back to Duluth to have children. She has been doing freelance design work throughout her career but in 2004, just before the birth of her third child, Elizabeth decided to establish her own Graphic Design business. Her fourth baby, Mayne Design, was born.

In 2013, life changes led Elizabeth to scale back Mayne Design in order to seek outside employment. She was hired as a temporary Campaign Executive for Head of the Lakes United Way first, and then as their Database Manager/Campaign Associate three months later.

In January 2018, Elizabeth was promoted to Marketing Director which, as a part-time position, allowed Elizabeth to return to Mayne Design in a larger capacity. Elizabeth split her work week evenly between Mayne Design and United Way.

However, 2020 arrived with ideas of its own, and changes at United Way put Elizabeth in a unique position to take a new risk, and return to Mayne Design full time!

What is Mayne Design?

Mayne Design is a full-service graphic design company based in Duluth, Minnesota. We specialize in working with small businesses to create branding for their company. We also offer a large variety of creative services from logos to brochures and advertisements to website design and maintenance.

At Mayne Design, we will work with you to create a unique design that truly reflects your ideas and vision. Open communication is the key to our mutual success. We strive to maintain an open dialog with our clients so that we can completely understand what our client is trying to portray in their design. We will not stop until the client is completely satisfied with the design.

Grateful to have worked with Elizabeth now on two business website building projects. We have found the process to be affordable, personal, adaptable, and well done.  Elizabeth was professional and patient with us throughout the conceptual, exploratory, and final design phases of our website creation.

We appreciate her expertise, creativity, guidance, and hands-on care. All was done with attention to detail.  We highly recommend Mayne Design.

Elizabeth is a delight to work with. She is talented, timely, and a great communicator. She understands the needs of a small business. She's designed two websites that are just what we wanted. We are very happy we found her!

Mayne Design was an absolute joy to work with! Elizabeth was responsive, prompt, kind and the end product was exactly what we were looking for! I can not speak highly enough about Mayne Design! Will be using them for many, many more projects!

I like to refer my clients to local graphic design professionals. Elizabeth is knowledgeable and offers great designs and more. Her websites are professionally designed and she offers social media management as well. Thank you for your assistance!

Mayne Design has a dedicated team of creatives to serve your design needs.

Elizabeth Mayne, has been working in the field of  marketing and graphic design for over 20 years. Elizabeth's education includes a Bachelors Degree from the University of Minnesota, Duluth and an additional two-year degree in Electronic Publishing (Graphic Design) from Hennepin Technical College in Minneapolis. She received several educational and merit scholarships from local design and printing businesses to help fund her education. In 2004, Mayne used her knowledge, skills, and creativity to start her own graphic design and marketing company, Mayne Design. Over the past 15 years, she has worked with hundreds of organizations of all sizes to hone their brand, create unique designs, and implement effective marketing campaigns.

Mari Dog (MD) is our Mayne Design mascot and onsite comic relief. At just under a year, this golden retriever is full of youthful energy. She prides herself on really taking a bite out of projects and producing results that you can sink your teeth into.

While somewhat destructive at times, Mari is loyal and a dedicated presence at our office. You can always count on her to be within arms reach for a belly rub or game of tug-of-war. When she's not working at Mayne Design, she enjoys long walks, car rides, and torturing the cat.

Now that you know us, tell us more about you...

We offer FREE consultations, and would love to know more about you and your marketing wish list. Contact us to set up a meeting!